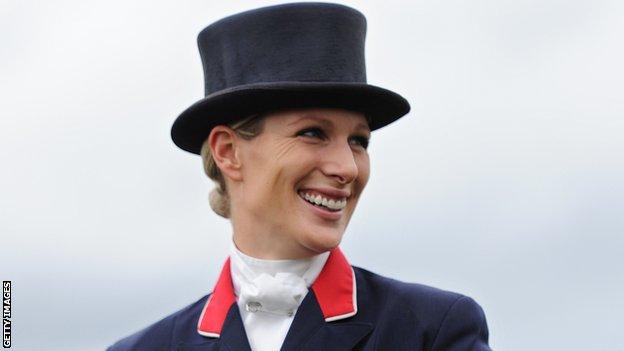 Mark Phillips has insisted he will not deserve credit for any success his daughter Zara may have at the Olympics.

"When she first won the Europeans and the worlds I was much more involved than I am now," her gold-medallist father told BBC Gloucestershire.

"The Brits have a great backup organisation and Yogi Breisner is a super coach - that's where she gets most of her strength from."

Zara Phillips MBE, on board Toytown, won individual gold and team silver at the World Equestrian Games in 2006.

They also won the individual and team European titles in 2005 and team gold two years later.

Phillips, the 2006 BBC Sports Personality of the Year, will be making her Olympic debut along with Piggy French in the GB eventing team, having missed competing in both Athens and Beijing because her former horse, Toytown, was injured.

However, the team will not be short of experience as London will be Mary King's sixth Games, William Fox-Pitt's fourth, and Kristina Cook's second.

They they were all part of the eventing team which claimed bronze at the 2008 Olympics in Beijing.

Mark Phillips, who won team gold at the Munich Games in 1972 and team silver 16 years later in Seoul, also revealed that Gloucestershire dressage specialist Carl Hester played a major role in helping his daughter gain selection for the Olympics.

"She's worked super hard with Carl Hester this winter on her dressage because that was really High Kingdom's weakest phase," he added.

"That seems to now have come to an acceptable level and hence her selection. He's a super jumper and I think the right type of horse for Greenwich."

Hester will also be competing at the Olympics, having been selected in the four-strong dressage team along with Richard Dawson and two other Gloucestershire riders, Laura Bechtolsheimer and Charlotte Dujardin.