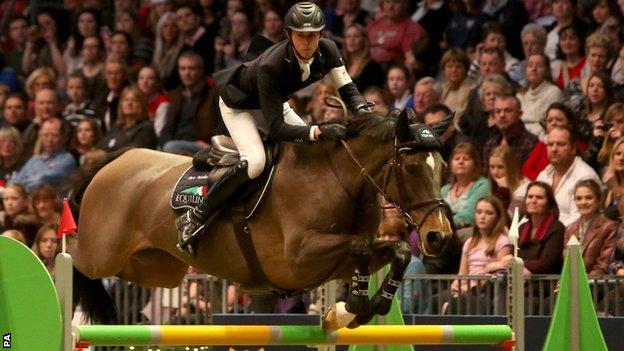 Olympic champion Ben Maher has been crowned the leading riding at the London International Horse Show.

Britain's Maher, 29, won four classes on four horses during the competition at Olympia.

Five Britons were in the nine horse jump-off for the Olympia Grand Prix but the £21,600 top prize went to Germany's Marcus Ehning.

Michael Whittaker and Viking were the leading British combination in fifth in the show's finale.

Earlier on the final evening on Sunday Maher finished third in The Snowman Stakes, an accumulator competition where riders score points for jumping each fence, behind Frenchman Roger Yves Bost in first and Guy Williams in second.

Maher was a member of the British showjumping team that won gold in London, along with Nick Skelton, Scott Brash and Peter Charles.

The focus will now switch to the European Championship in Denmark next August and Great Britain show jumping boss Rob Hoekstra is confident his team can repeat their Olympic success after a good showing at Olympia.

"I think we have a realistic chance of doing very well at the Europeans," he said.

"Every time we go to a championship we go to win. Things worked out great for us in London, but we will have to prepare hard for the Europeans.

"To be introduced as Olympic champions is a nice pressure to have. It brings much more advantages than it does disadvantages."