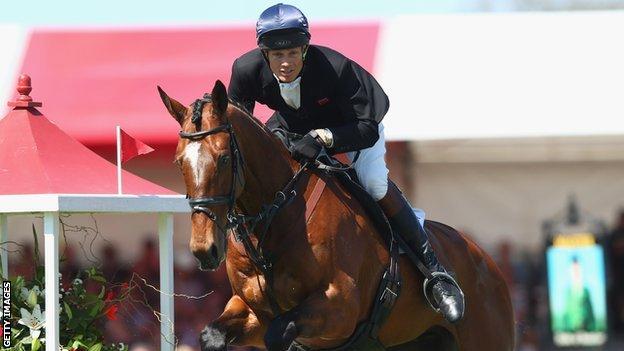 The Grand Slam is awarded to any rider who wins consecutive Burghley, Kentucky and Badminton titles.

"It wasn't to be but the Grand Slam build-up has been fantastic excitement in every way," said Fox-Pitt, 44.

Paget, 29, became the first Badminton debut winner for 33 years after a clear round on Clifton Promise, while Germany's Michael Jung finished second.

British Olympian Fox-Pitt and New Zealander Andrew Nicholson both entered the final showjumping phase with a chance of completing a clean sweep Grand Slam. The feat has been achieved only once before, by Pippa Funnell 10 years ago.

Fox-Pitt, the 2011 Burghley winner and 2012 Kentucky champion, would have gone for the Grand Slam prize at Badminton last year, had waterlogging not caused the event to be cancelled.

Nicholson, meanwhile, is the reigning Burghley champion and won at Kentucky last weekend, meaning two riders were contesting the Grand Slam at one event for the first time.

Fox-Pitt finished fifth aboard Parklane Hawk after hitting a fence, while world number one Nicholson was third on Nereo.

"I was really pleased with how he [Parklane Hawk] jumped today, and the one he flicked a toe at was the one that came down," added Fox-Pitt.

Jung, the reigning Olympic, world and European champion, rolled a pole on the final fence aboard La Biosthetique-Sam to finish second, 0.3 points behind Paget.