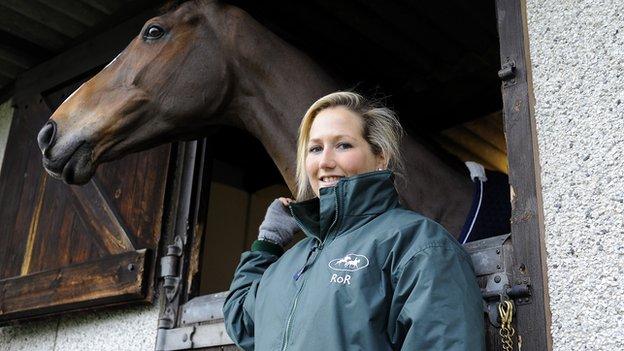 Laura Collett says she owes her life to a hi-tech air jacket after a heavy fall which left the British event rider with spine, shoulder and rib fractures.

The 23-year-old was in a coma for six days, but wants to resume riding and represent Team GB at the 2016 Olympics.

"Paramedics said the air jacket I was wearing [which inflates much like a car air bag] probably saved my life," Wiltshire-based Collett told BBC Sport.

Collett fell from Tis A Beauty at Tweseldown, Hampshire on 8 July.

The rider, who has also been retraining top racehorse Kauto Star in dressage, suffered crush injuries to her lungs and liver after falling from the seven-year-old mare and was taken to the intensive care unit at Southampton General Hospital.

But she is now out of hospital and well enough to speak at length about her close escape.

"Any horse falling on you is a pretty serious thing. To come away with hopefully no serious injuries is pretty lucky really. The horse was a bit stiff but she's fine apart from that. I've been up to the yard and seen all the horses," she said.

"There's nothing really that can't be fixed. I've got a few fractures, but they are all on the mend. Hopefully, it won't be too long. The plan is to get back to normal, and get back to eventing as soon as I can."

The lightweight air jacket, which is now used by many riders in eventing, is designed to inflate after a fall and offer a cushion to the neck, spine and body.

"The paramedics watched the video footage and my jacket did go off before the horse came down on me. I'm very thankful I had an air jacket on and hope more people get them," she added.

"They are not compulsory. It is at your own discretion. A lot of people do wear them. Anyone who has had a bad fall with them on would swear by them. They are very good jackets and something we have got used to.

"A few years ago, no-one had heard of them. Now a lot of people wouldn't ride without them. Sport changes, and things get better."

How does the air jacket work?

Collett is recuperating at Oaksey House, a facility in Lambourn, Berkshire, run by the Injured Jockeys' Fund, with her stay funded through the British Olympic Association's world-class scheme.

It gives her access to leading physiotherapists, with specialist conditioning work and massages aiding her rehabilitation.

"Hopefully, it won't be too long before I can get back riding, and Rio [Olympics] is the aim for the next few years," she said.

"I don't remember being at Tweseldown on the day and I rode three horses before I had my fall. It's completely blank.

"I don't remember being in hospital when I was in my induced coma. I only really remember when I was woken up and had friends and family there, which means I'm not as badly off as the poor people who had to suffer me being in hospital in a coma for almost a week. Really, I've got off lightly."

Collett said she had been away from her yard at Membury, which currently has about 12 horses, for about a fortnight - the longest time she can recall in recent years.

"My horse Rayef stopped eating for a few days, and as soon as I got back he started eating again. It could be complete coincidence, but I'm going to go with the fact that he was just pleased to see me," she said.

Two-time Cheltenham Gold Cup winner Kauto Star, the winner of a record five King George VI Chases, was another pleased to see her.

On retirement from racing, the steeplechaser was transferred from champion trainer Paul Nicholls in Somerset to Collett by owner Clive Smith for a new challenge.

"He's in great form, he behaved really well doing a dressage display at the Barbury trials, which was the day before my fall, and he was fantastic," said Collett.

"For everyone involved and hopefully anyone who was a bit unsure whether it was the right thing to do, he is taking to it really well. He's an amazing horse and I don't think we'll see another like him in any discipline, let alone being good at one sport and retraining in another without having any problems.

"In a few months' time when things quieten down, we might take him somewhere. He hasn't got anything to prove and anything he does is a bonus."

While Collett improved in hospital, she was conscious of the battle being waged by injured jockey Brian Toomey, who is in hospital with a serious head injury after a fall at Perth racecourse.

"That's where you can be very lucky. You can have someone else who's fallen and be in a worse condition," she said.

"Thankfully, he seems to be making progress. It was amazing to see the support he's getting as well and fingers crossed, he keeps improving."

Collett said she will have no problem returning to the saddle, particularly as she remembers nothing of her accident.

"We know it's part of our sport. As riders we are probably better at carrying on as normal, whereas other people not associated with it might find it a bit strange that you can get back on as though nothing has happened. You just have to take the good with the bad," she added.

Collett was wearing an air jacket manufactured by Surrey-based company Point Two, which says it has sold 30,000 of the jackets globally.

"The belief from many that saw Laura's accident, including paramedics and jump judges, and indeed Laura herself, was it prevented more serious injuries," said the firm's general manager Julian Westaway.

He said tests were continuing on a jacket which might be suitable for jump racing.

"We have been working closely with the British Horseracing Authority and Injured Jockeys' Fund to develop an air bag standard for jockeys as there is growing understanding of the protection that could be offered in the event of a fall," he added.

"The jackets have been tested for a wide range of features including inflation speed, pressure at inflation, impact tests, area of coverage, and ergonomics to ensure the jockeys could still tuck and roll."