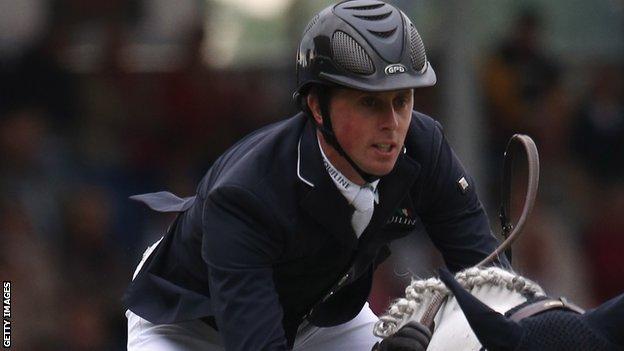 The 30-year-old, who won team gold at London 2012, beat Germany's Marcus Ehning into second in the jump-off at Hickstead while Ukrainian Ulrich Kirchhoff finished third.

Maher completed the jump-off in 48.88 seconds and while Ehning was marginally quicker, he incurred four faults.

A year to the day after Maher and his British team-mates Nick Skelton, Scott Brash and Peter Charles began their Olympic team gold medal-winning campaign in Greenwich, he landed the gold trophy on Tripple X III.

Only two British riders - Charles and Tim Stockdale - had won the event since 1999, but Maher was not to be denied after jumping two clear rounds.

He added his name to an illustrious King George roll of honour that includes the likes of David Broome, Harry Llewellyn, Harvey Smith and Paul Schockemohle.

First to go in the jump-off, Maher posted a clear round and time of 48.88 seconds. Enning then suffered for his four faults, with Kirchhoff more than two seconds back, also on four faults.

"The horse was jumping well prior to Hickstead, so Friday was a disappointment," he said.

"I went home on Friday scratching my head a little bit as to what went on, but I watched a few videos and decided to change some of my equipment - the horse's bit and boots - to what I used at the Olympics.

"Normally, I wouldn't change before such a big competition, but I know him well enough, and I was confident the changes would improve his performance."