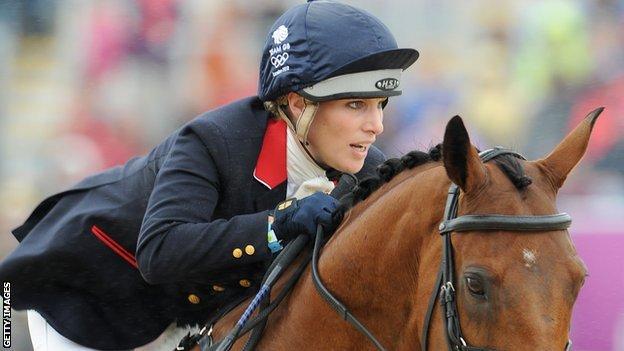 Former world eventing champion Zara Phillips has been named in the Great Britain squad for the World Equestrian Games, which start in August.

The Queen's grand-daughter, who gave birth to daughter Mia in January, hopes to represent her country at the 2016 Olympics in Rio.

She will be joined in the squad by Tina Cook, William Fox-Pitt, Pippa Funnell and Oliver Townsend.

"It's fantastic to be part of a team again," said Phillips.

The British Equestrian Federation announced on July 1 that Izzy Taylor and her ride Allercombe Ellie had been withdrawn from the team due to a "minor setback" with the horse in training.

A replacement has not yet been announced.

Phillips, 33, became the first member of the Royal Family to win an Olympic medal as part of the Team GB eventing team, which included Fox-Pitt and Cook, that took silver at London 2012.

Phillips will once again ride High Kingdom at this summer's competition, which takes place in Normandy, France.

"High Kingdom has improved each year and every time I've taken him to a big competition he's got better and better," she added.

"He's felt good this year and hopefully will peak at the right time."