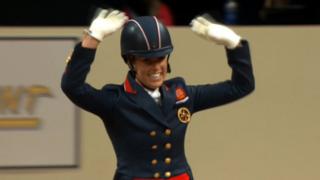 After her victory Dujardin described Valegro as "magical" and said she is "living the dream".