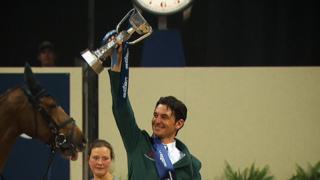 Riding on Albfuehren he followed up his clear first round by knocking down two fences in his second and finished within a margin of less than a quarter of a second.

He finished one penalty ahead of France's Penelope Leprovost with Ireland's Bertram Allen coming in third.

Inspired by the horse racing? For more information on how to get into the sport, go to the Get Inspired website .