Enable, sent off the 10-11 favourite, led for most of Europe's richest horse race to secure Dettori and Gosden their second Arc win in three years.

Cloth of Stars (25-1), ridden by jockey Mickael Barzalona and trained by Andre Fabre, was second.

"I was very confident all week," Dettori said. "She is a tremendous filly."

The three-year-old made a strong start from stall two and pulled away inside the final two furlongs to stamp her authority.

It would be wonderful to go to the opening of the new Longchamp and do it again.

Dettori always had her well positioned behind Aidan O'Brien's pair of Idaho and Order Of St George.

Gosden, who also won with Golden Horn two years ago, said: "She's very special and she was well positioned by Frankie in order to show her sheer class and brilliance.

"It's all about the filly and the owner-breeder Prince Khalid [Abdullah]. He bred the mother and for his farm to produce something like this is exciting for us all.

"If she's in great form we should consider next year. Maybe it would be wonderful to go to the opening of the new Longchamp and try to do it again." 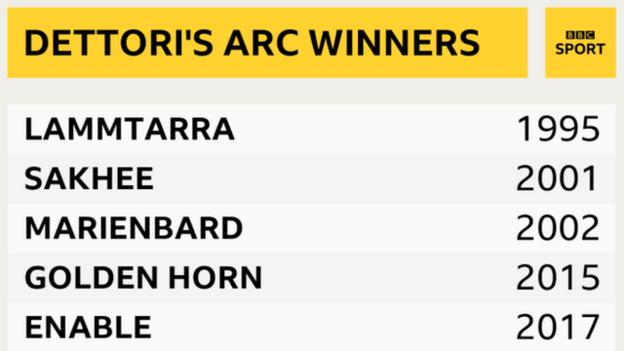 It capped a memorable season for Enable, in which she secured five consecutive Group One victories - in the Epsom Oaks, the Irish Oaks, the King George VI and Queen Elizabeth Stakes and the Yorkshire Oaks - before victory in the Arc.

Frankie Dettori will dominate the headlines after this, perfectly reasonably as a well-known and much-liked sportsperson reaching another notable landmark.

That, however, shouldn't detract from what Enable, her trainer and his team have achieved.

On the go since February and racing against some of the very best since the Chester Festival in May, John Gosden and co have got her to deliver the goods yet again despite inevitable fears she might have "had enough" for the year.

And she's won - easily - against almost as good a field as could have been assembled to take her on at a track where things can easily go wrong. Bravo!