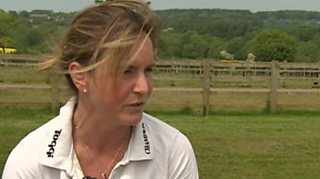 I definitely wanted to give up - French

Injuries to two horses saw French miss her home Games and the 2013 European Championships, prompting her to take a few years away from the sport, during which she met partner Tom and became a mother.

But a return to form means the Norfolk rider is now targeting the Tokyo Olympics in 2020.