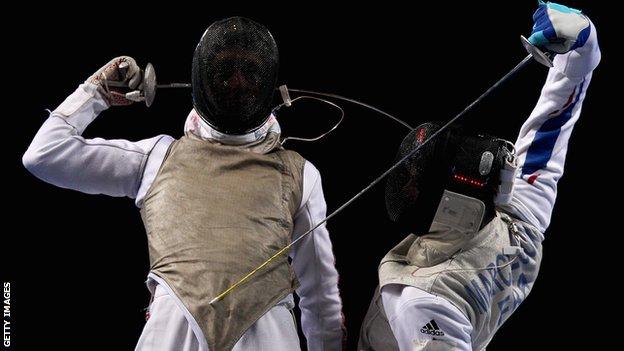 Cook claims "multiple breaches" of the Olympic selection policy were made in his case.

"I am determined that no-one else should go through this totally dispiriting experience," the 31-year-old said in a statement.

"I've been so let down by my governing body. In my opinion, they have not treated me well."

British Fencing rejected Cook's appeal against his exclusion, with the 2010 British champion claiming he was initially left out because he did not give contact details to selectors, who told him they did not know he wished to be considered.

His request for an appeal hearing was turned down in June on the grounds the deadline was "long past".

The Edinburgh fencer is now being represented by Simon Smith, a partner in defamation, media and reputation management specialists PSB Law.

His complaint is made in libel to British Fencing and concerns statements made to the media by the governing body.

At the time of his appeal rejection, British Fencing communications director David King told BBC Sport: "We stand by the fact that our selection procedure is very clear - 25 other athletes participated and five appealed their non-selection. Keith Cook did not participate in the process."

The governing body added that Cook was still considered but did not reach the required standard.

However, Cook asserts that the minutes of the Olympic selection meetings will show that he was never considered.

"To add insult to injury, they've even claimed they didn't know I wanted to be considered for the Olympics after six years of dedication and training - just bizarre," he added.

"The Olympic motto is 'Inspire a generation'. This is not how I wanted to do it, but I am showing the courage to stand up for what's right - for the truth."