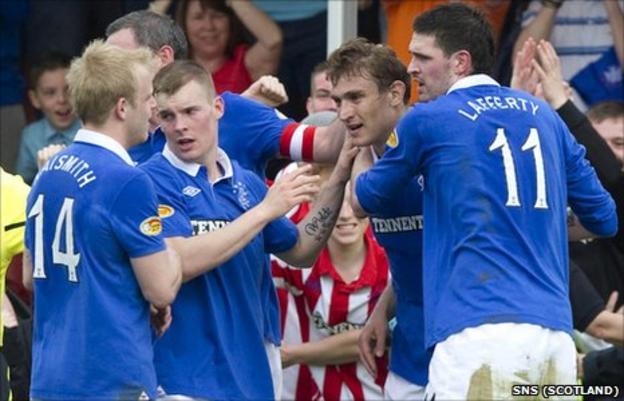 Rangers manager Walter Smith was pleased to get three points against Hamilton despite a sluggish performance.

Accies had the better chances, and missed a penalty, with Nikica Jelavic's solitary goal enough for a Rangers win.

"We never really reached the levels we have done of late," Smith told BBC Scotland.

"We were a bit off the pace today and still managed to win, so we're delighted with that."

Jelavic's goal from a direct free-kick just before half-time lifted Rangers to within two points of title rivals Celtic.

It was a hard-fought victory for the Ibrox side and Smith insisted it was never going to be anything else.

"It's always difficult to come here and get a win and results in the past prove that," he said.

"People think that when you say that kind of thing before a game it's just management-speak.

"Billy Reid always has Hamilton extremely organised. If you look at them over the last three seasons or so, they try and play football and they're awkward to break down.

"When the games come on a Saturday and in midweek it takes a bit out of players, and you've got to keep a good edge and enthusiasm in your team.

"There have been days like today where we haven't been as bright but they held out and we're delighted about that."

Smith also gave an update on the fitness of some of the players he has had to do without over recent weeks.

"We don't know when Kirk Broadfoot will be back. He had an injury, came back from that and then injured his Achilles," Smith explained.

"Lee McCulloch trained the last couple of days but he had some fluid in his knee this morning, so didn't make the squad.

"And Madjid Bougherra and Vladimir Weiss I would hope would come back within the next 10 days or so."

Before the match at New Douglas Park, Rangers assistant boss Ally McCoist revealed that on-loan Manchester City winger Weiss is to have a scan on a foot injury in order to assess how long the Slovak will be out of action.

The 20-year-old suffered the injury against St Johnstone at the end of February and it was discovered to be worse than first thought while he was on duty with his national squad.