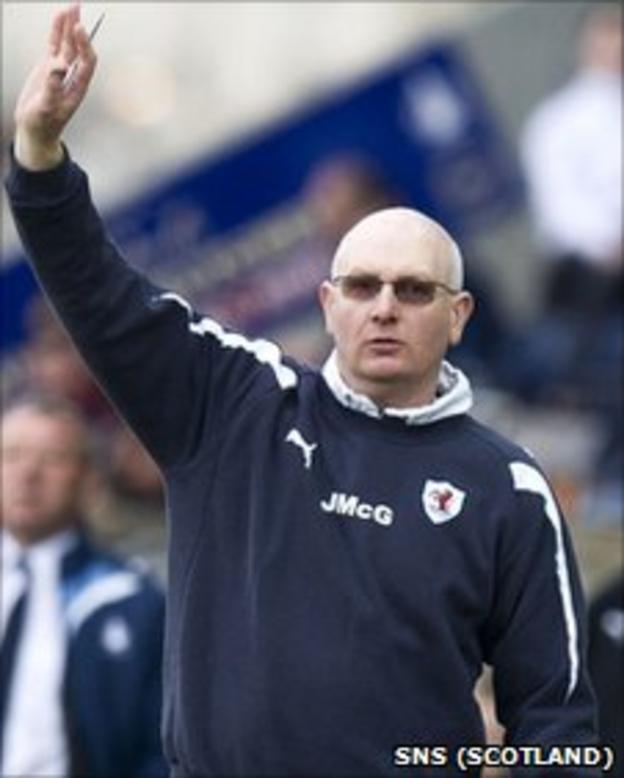 Scotland boss Craig Levein says John McGlynn of Raith Rovers would be his choice as manager of the year.

Under McGlynn this season the Kirkcaldy club is challenging for the First Division title.

"I tend to look for someone who hasn't had the biggest budget and has had to work with the squad he has," said Levein.

"For Raith to be competing at the top of the league against full-time teams, then for me it's a no-brainer."

Levein was speaking at the launch of this year's poll to find Scotland best football manager, as voted by their peers.

And he cited the same reasons of financial clout for not choosing a potential Rangers or Celtic winner.

"There are a number of good candidates. Neil Lennon in his first full season as Celtic manager has done a very good job," said Levein.

"If you look at the finances in football, logically the Old Firm should win everything.

"The jobs themselves bring huge amounts of pressure.

"The real test for them is Europe, where they're punching above their weight against teams who have far bigger budgets than they do."

Levein and McGlynn worked together at Hearts, where Levein in charge between 2000 and 2004.

After a decade on the backroom team at Tynecastle, McGlynn left to take up the managerial reins at Starks Park in 2006, where he guided the team to the Second Division title three years later.

This term Raith are chasing Dunfermline for the Division One title and promotion to the Scottish Premier League.

"Of course, we're still a fair bit away from the end of the season so it's yet to be seen if Rovers can get promoted," added Levein.

"If they do it's a fantastic achievement."