Sunderland midfielder Lee Cattermole has blamed the absence of a string of first-team players for the club's slide down the Premier League table.

Michael Turner, Titus Bramble and Cattermole have all had spells on the sidelines, coinciding with a slump from sixth to 15th since January.

"We've lost our way a little bit, down to injuries more than anything," Cattermole told BBC Late Kick Off.

"There have been injuries everywhere, and it does disrupt teams."

The Black Cats were also robbed of the services of Fraizer Campbell and John Mensah last week, who are both unlikely to play again this season because of injury.

Another key factor in the drop in form - which has seen Sunderland gain just one point from the last nine league matches - has been the lack of goals.

Steve Bruce's side have scored just seven times since beating Blackpool in late January, despite having scored 35 league goals in total during the 2010-11 campaign.

It is a statistic that is highlighted by the fact the departed Darren Bent remains the club's top marksman with 11 goals, despite his exit to Aston Villa during the January transfer window.

"Bent was a big player for the club, but if he wanted to leave you can't stand in the way," Cattermole said.

"No-one has mentioned it in the dressing room, I've not heard one player mention his name if I'm being honest, so I'm not sure if he's been missed there, but obviously we've been left with one striker.

"At the time if you look Danny Welbeck was the star man when Bent left, but then we've left Bent go and Danny's got injured straight away, and that was a bit of a shame.

"But he is a good player and I'm certain he would have done a good job in recent weeks." 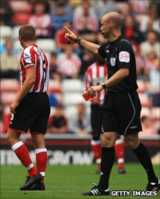 I have got a reputation, it will stick and it's up to me to get rid of it but I believe I play the game in the right way

On a personal level Cattermole was given the responsibility of captaining the club by manager Steve Bruce, as a reward for his fine performances during his debut season on Wearside.

However a mixture of injuries and notably suspensions has limited the one-time England under-21 international to 21 Premier League games, with nine yellow cards and two reds to his name.

"I have got a reputation, it will stick and it's up to me to get rid of it," Cattermole added.

"I believe I play the game in the right way, I never milk anything if someone leaves a bit in on me, it comes with the game.

"I've made mistakes, I've made silly challenges in the past but I've got to get it out of my system."

However Bruce has retained faith with the player whom he signed for both Wigan and Sunderland, although there have been warnings for the Stockton-born player regarding his temperament.

"We've had long chats about it because it did hurt me at the start of the season, I took such a backward step," he said.

"I know the position I was in at the start of the season, how I felt and it was lonely times for me, I'd just been given the armband and everyone in the country said I was going to lose it after three games.

"It's something I was relishing and maybe it did get the better of me at the start of the season.

"I want to take the club forward, the gaffer gave me the armband, I taken on the responsibility and it's something I am enjoying."