Craig Bellamy has a reputation for being outspoken but this complex character is busy going about securing a legacy that could change the way he is regarded.

Bellamy has been the driving force behind a renewed Cardiff City Premier League promotion push that appeared to be over in the wake of a win-less March.

Meanwhile, Bellamy's thoughts are also thousands of miles away in western Africa where the Craig Bellamy Football Academy has just finished its first term.

Bellamy has dipped deep into his pockets to set-up a foundation in war-torn Sierra Leone and open the country's first football academy as he believes the game he loves can give hope to a poor and troubled nation. 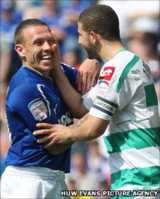 Craig gets everybody going as his work-rate is phenomenal

Bellamy's celebrated impact in his home city might lift a club used to false dawns and broken promises and carry them into a league that Bellamy is still good enough to grace.

"Craig is the catalyst of what we do," admitted Cardiff boss Dave Jones. "He is the leader of the camp. That is why he was made captain, because he leads by example."

And the 31-year-old has revelled in the responsibility of dragging his home-town club by the scruff of its collar to a meeting with English football's elite.

Adel Taarabt may have stolen the headlines with two superb goals to rescue a Championship point for leaders Queens Park Rangers in their 2-2 draw at the Cardiff City Stadium on Saturday and end Cardiff's four-match winning run.

But the glint in Bellamy's eye and the way he took the bit between his teeth were as impressive in the showdown between two of the Championship's star players.

The on-loan Manchester City striker has scored twice and created six of Cardiff's 14 goals since the international break as his tailored training regime and spared appearances at the start of the season are paying dividends when it matters.

He ran the Rangers defence ragged on Saturday with darting runs, chasing every chance and displaying a work ethic in searing heat that would wear out an onlooker as he created chances aplenty for himself and his team.

Cardiff may have suffered previous play-off heartbreaks but Bellamy's presence may just ensure this band of Bluebird brothers realise his dream of a top-flight return after 49 years.

Jones says: "When I worked with Matt Le Tissier at Southampton, it was always about Tiss. He couldn't play without the others but what he did do is lead by example and that is exactly what Craig does.

"He gets everybody going as his work-rate is phenomenal."

Former Wales international Iwan Roberts was a mentor to Bellamy when the teenager was rising through the ranks at Norwich City 15 years ago.

Roberts is sure his friend and former strike-partner would feel a failure if he failed to inspire his team and his city into the Premier League.

"He has played for huge clubs like Liverpool, Manchester City and Celtic but I think he feels under more pressure at Cardiff than at any other club," said Roberts, now a BBC Wales pundit.

"He has come to his home-town club and dropped down to the Championship with people thinking he should take this division by storm.

"And I'm sure he will think he has to get Cardiff promoted. There is massive pressure on him as the whole club and whole city are weighing on his shoulders. But he loves Cardiff and is a proud Cardiffian, this is home so would love to take this club up.

"People were expecting him to score 25 to 30 goals and take the mick in this division because of who he was.

"But when he came to Cardiff, he seemed to make the conscious decision of not being the 'Big I Am' and do everything himself so he kept it simple and fitted into the team and squad.

"Sometimes it wasn't the best thing for Craig but after a win-less March he probably looked at the table and thought, we still have a chance of automatic promotion.

"Perhaps he thought it was about time he stepped up to show the real Craig Bellamy.

"I think we had only seen it in fits and starts up until then but he has been unbelievable since."

Bellamy's 10th goal of the season against QPR followed his 11th assist of the year as he set-up strike-partner Jay Bothroyd, whose statistics also show Bellamy's impact. 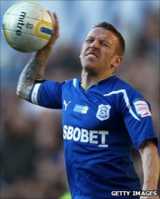 Craig has had a lot of bad press and has brought a lot of things on himself but, deep down, he is a good guy; maybe just complex and a little misunderstood

Bothroyd scored 13 times last season but has already scored 20 goals this campaign as well as earning an England international call-up.

"Him coming here is great for me as I see the way he trains and how hard he dedicates his life to football," said Bothroyd, who set up Bellamy's strike on Saturday.

Bellamy is not reinventing himself at Cardiff as there has always been a gentler side to a player often best known for off-the-field misdemeanours.

"There is more to Craig Bellamy than the public perception," continued Roberts.

"He puts a lot of money into different charities, is a family man who loves his children but you don't hear about because that because of Craig's chequered background.

"He can be controversial and hot-headed but wants to win whether it is at football, golf, table tennis or scrabble.

"He is committed to everything and when he sees people not putting the same amount of effort and work-rate into things than he does, it upsets him.

"Craig has had a lot of bad press and has brought a lot of things on himself but, deep down, he is a good guy. Maybe just complex and a little misunderstood."

Bellamy is showing, though, that home is where the heart is - and, as the standing ovation on Saturday showed, his people have taken him to their heart.