The Canaries thrashed Ipswich 5-1 in their last game on Thursday, before Cardiff held QPR to a 2-2 draw on Saturday.

"We only have a day to recover which is a bit of scandal really because I think Norwich had four days," said McPhail.

Cardiff are currently third in the Championship, one point behind Norwich.

In Monday's fixtures, the Bluebirds travel to relegation-threatened Preston while Norwich host Derby.

Norwich, seven points behind Rangers, and Cardiff are the main contenders for the second automatic spot with three games remaining.

"It baffles me. Why would you give an advantage to the other clubs that played on Thursday?

"It is not right as we should have had the same amount of rest as everyone else at this stage of the season.

"We should have all played Thursday. I don't know why league did that." 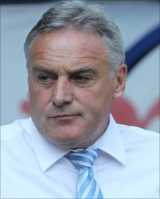 Why would you give an advantage to the other clubs that played on Thursday?

"I don't know who makes these fixtures up," said McPhail.

"But we feel we have a strong enough squad that can go to Preston and win.

"We feel we have a great chance of promotion this year and after QPR, we spoke that we have to go to Preston with the mentality of picking up three points.

"Automatic promotion is out of our hands but we have to keep plugging away."

Cardiff's big-money Malaysian owner Vincent Tan has given his team his private jet to fly up to Lancashire in style.

"It will also give everyone a bit longer to rest," added Jones.

But Cardiff have been given a fitness boost as key centre-back Mark Hudson and striker Michael Chopra are bidding for a return to the starting line-up after injuries.

Hudson, who has been impressive in defence this season, has been out since injuring his knee in a 3-3 draw at Millwall on 19 March but is line for a comeback against a struggling Preston side who are bidding for their fourth successive home win.

Chopra, meanwhile, played the final three minutes against QPR after being out for five weeks with a hamstring tear.

"They have been outstanding this season, so for them to come back at such a vital stage is great," McPhail said of the pair.

"There will be some tired bodies in the squad after Saturday so they could be vital on Monday."