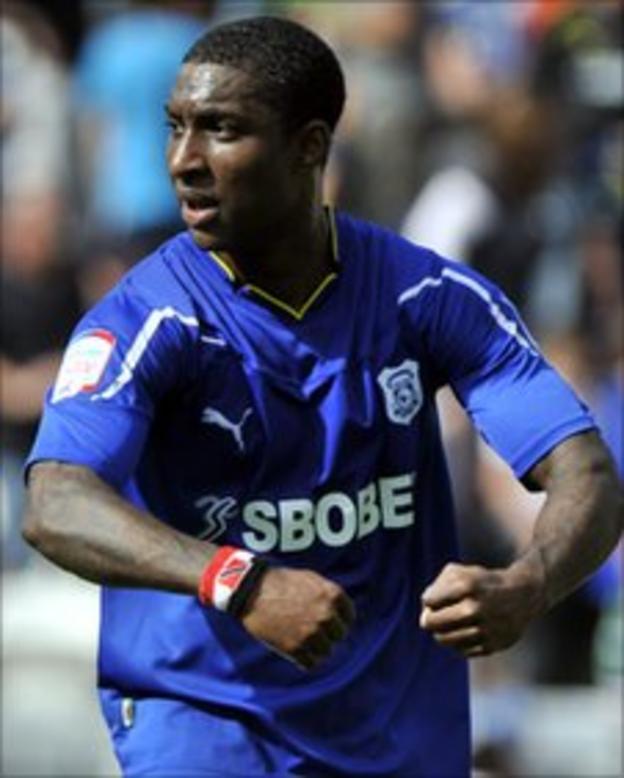 Jlloyd Samuel has told his Cardiff City team-mates to "stand up and be counted" as they push for automatic promotion to the Premier League.

The Bluebirds sit just outside the second automatic spot in third, a point behind Norwich City with two games remaining.

On-loan Bolton defender Samuel knows promotion is out of Cardiff's hands but has urged them to keep on pushing.

"We've got to keep the pressure on and that's all we can do," he said.

"It's in their hands now. We had the control, but unfortunately we were unable to win against Queens Park Rangers.

"It's going to go down to the wire. It's up to us to keep winning our games, that's all we can do and then hope for them to slip up."

Cardiff had held second place until Saturday's 2-2 draw with leaders QPR, allowing Norwich to leapfrog them.

The Canaries left it late to keep hold of second on Monday with an injury-time winner against Derby County while Cardiff relegated Preston North End with a 1-0 win.

Both Cardiff and Norwich do not play until next Monday - Cardiff host Middlesbrough and Norwich are away to Portsmouth.

The Bluebirds kick off earlier on Monday and Samuel, who has made five appearances since joining on loan in March, believes they have the chance to up the ante on Norwich.

"We have to win the game and if we do then we're going to be in the back of their (Norwich's) minds," added Samuel.

"All we can do is keep winning and see what happens.

"Pressure is good, this is what you want. You want to play in the big games. If you want to get into the Premier League, it's pressure every week.

"This is where all the players have got to stand up and be counted.