He is the quiet man who is ensuring Cardiff City are having a big say in the push for Premier League promotion.

Kevin McNaughton had been considered one of the Championship's unsung heroes but Cardiff's Scottish braveheart beat the embarrassment of Bluebirds striking riches to the fans' Player Of The Year gong on Friday. 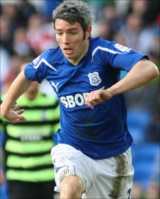 Cardiff top scorer Jay Bothroyd's 20 goals this season have helped win him an England international call, Craig Bellamy's attacking X-Factor is the driving force behind their eight-match unbeaten run while Peter Whittingham and Seyi Olofinyana have been effective in midfield.

But it is the consistent defensive displays of the versatile McNaughton that has provided Cardiff the platform for a automatic promotion spot from the Championship.

McNaughton is not a stylish defender with the finesse of a ballet dancer, this is a typically no-nonsense Scot that wears his heart on his sleeve and loves the sound of a crunching tackle more than his own voice.

And while he keeps himself to himself, the 26-year-old, who simply enjoys from defending, leads by example.

"Kevin is a big part of this football club," explains Cardiff manager Dave Jones. "He has been since the day he walked in.

"He is a quiet sort of man who has a big influence around the place in his personality and his character - and you need that because everybody can't be brash and loud.

"Kevin just goes about his business and does have a calming effect on everybody else whether he realises that or not.

"He is well thought of here not only by his peers but by the staff."

The cult hero the Cardiff City Stadium faithful call 'Super Kev' and has played at left-back, right-back and most recently at centre-back for the Bluebirds this season with minimal fuss but maximum impact.

"Lots of people think his position is at full back but actually when I first went to watch him, his position was centre-half," recalled Jones.

"He enjoys playing centre-half and reads the game very well.

"But because he is quite athletic and is a very, very good defender, Kevin can play anywhere along the back."

McNaughton is expected to revert to right-back on Monday as third-placed Cardiff hope to maintain the pressure on second-placed Norwich City, who are a point ahead, when Jones' men hosts Middlesbrough as the race for the Championship's second automatic promotion spot reaches fever pitch.

He has started the last eight games for Cardiff at centre-back deputising for the injured Mark Hudson but his return means McNaughton will once again shuffle across the back-line.

McNaughton is as adept at performing a last-ditch goal-saving tackle as he is bombing forward at full-back to help out, should they require any assistance, a star-studded Cardiff front-line also frequented by Michael Chopra.

And it is argued that McNaughton's free signing from Aberdeen in 2006 is Cardiff boss Jones' most shrewd and finest acquisition in almost six years in south Wales.

"He is one of them in the Cardiff squad that should be able to make the next step into the Premier League," said former Wales and Everton defender Kevin Ratcliffe.

"McNaughton has every attribute of being a top defender. He has good pace, good distribution, reads the game well and is so reliable and consistent week-in and week-out wherever he plays across the back.

"And is so composed, he rarely gets flustered and is calm under pressure. The amount of games he plays and the consistent level is testament to his professionalism. He rarely has a bad game."

Ratcliffe was one of the world's finest centre-backs in the 1980s during a trophy-laden career at Everton and now watches McNaughton regularly as a BBC Radio Wales summariser.

Jones, another former Evertonian, has unearthed some gems as the Cardiff manager signed centre-back Roger Johnson for a pittance before selling him to Birmingham City for £5m in 2009.

While Bothroyd and last season's top-scorer Whittingham have been big hits despite being purchased for very little.

But Ratcliffe added: "McNaughton has certainly been one of Dave Jones' best buys.

"To win the Player of the Year accolade when Bothroyd has scored 20 goals and Bellamy has had a phenomenal impact at the club means McNaughton has done something right on a consistent basis."

McNaughton has missed just two leagues games this season and was a mainstay in their 2008 FA Cup final adventure before losing to Portsmouth at Wembley.

But in triumph or adversity, McNaughton rarely puts a foot wrong.

And Ratcliffe adds: "He has done Dave been proud and despite having the grey hair, he has plenty of time on his side."

He is Cardiff's resident film expert and both McNaughton and Jones are hoping for a happy promotion ending this season.