Middlesbrough boss Tony Mowbray says he will adopt a patient approach to the club's future, with the support of chairman Steve Gibson.

The Teessiders will begin a third season in the Championship in 2011-12, while parachute payments from the Premier League end this summer.

"There's no pressure to get promotion, I don't want to give people false hope," Mowbray told BBC Late Kick Off.

"We are looking for improvement, to be at the right end of the table."

One issue for Mowbray to contend with in his rebuilding programme is the potential loss of players from his squad during the summer.

Star talents such as Rhys Williams have been openly targeted by Premier League clubs, while those players on top flight-style salaries such as Julio Arca and potentially Kris Boyd could leave to cut a large wage bill.

"Next season the team is going to potentially get weaker, so it's not life or death to get back to the Premier League next year," said Mowbray.

During his time as a player and a manager Mowbray has experienced the glory of promotion to the top flight on several occasions.

The Redcar-born stopper was part of the Boro side that went from the old Third Division to the top flight in successive seasons from 1987 to 1989 and then as an Ipswich player was a Wembley goalscorer and play-off winner in 1999-2000.

Later as a manager he guided West Bromwich Albion to the Premier League as champions in 2008, having tasted disappointment as defeated play-off finalists the year before.

Next season will be Mowbray's first full campaign at the helm, having taken charge in October 2010 following Gordon Strachan's exit. 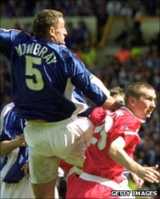 When I was a player at Ipswich, we had four consecutive years in the play-offs, and eventually got there, and the following year because the team had been together four or five years we finished fifth in the Premier League

And, having returned to the club in the midst of a relegation battle, he is looking to build on a positive end to this campaign which saw Boro win their last four games to finish 12th in the table.

"We want to build a team that can try to improve," Mowbray continued. "Look at Cardiff who we played recently, they've been in and around the play-offs for four or five years.

"When I was a player at Ipswich, we had four consecutive years in the play-offs, and eventually got there, and the following year because the team had been together four or five years we finished fifth in the Premier League.

"What they tried to do then was push on really quickly, and they lost that camaraderie in the dressing room by making too many changes probably.

"The message from me is to try to build your football club from the bottom, block by block, so when you do get to the Premier League, the group will have been together three, four, five years.

"We all understand each other's strengths and waknessess and we can be competitive, rather than a short route of trying to buy some players, stick them all together, hope that they get promotion.

"The aim is to get there and sustain Premier League football for this town."