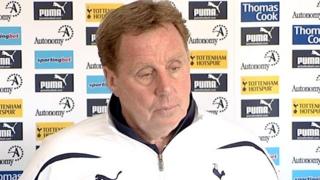 Dalglish is a legend - Redknapp

Tottenham manager Harry Redknapp hails Liverpool counterpart Kenny Dalglish as "different class" and a "proper legend" as the two clubs prepare to meet in the Premier League on Sunday, while he believes his side have enjoyed a better season than last year despite missing out on a Champions League qualification spot.

Redknapp also gives his views on the improper conduct charge given to Sir Alex Ferguson over comments he made about referee Howard Webb.