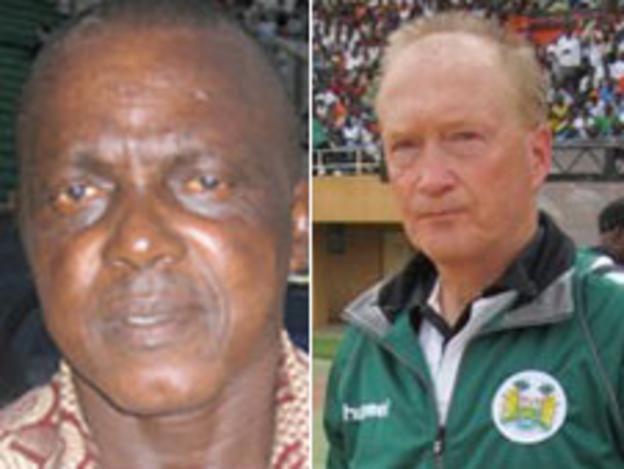 Swede Lars Olof Mattsson has been retained as coach of Sierra Leone, for the time being at least.

The move comes after a lengthy meeting between the Sierra Leone Football Association (SLFA) and the country's sports ministry.

The two bodies had disagreed over who should coach Leone Stars.

Mattsson had been appointed by the ministry but the SLFA had refused to recognise him and wanted local coach Christian Cole to take charge.

The problems culminated last week when both coaches named squads for the 2012 Africa Cup of Nations qualifier against Niger on the weekend of 4-5 June.

This lead to the SLFA threatening to withdraw the team from the Nations Cup qualifiers if the ministry insisted on using Mattsson.

Following Monday's meeting it was decided that the Swede will lead the team at least for the game with Niger and that Cole will continue to be his assistant.

Sports Minister Paul Kamara told BBC Sport that he will work hard to ensure the two can work together.

"I'll talk to Mattsson to forget about the past and work in the interest of Leone Stars and Cole too should know that Sierra Leone is his country and he should put his country's interests first," he said.

"Nevertheless Mattsson will come to Freetown with two other Swedish coaches, one of them a goalkeeper coach as part of his back room staff.

"I'm pleased that the dispute has been resolved and I hope after the Niger game we'll come together and appoint the two coaches for the rest of the qualifiers.

"There is now a new relationship between my ministry and the SLFA, we have now understood each other and we'll now work together to qualify Leone Stars."

Mattsson was originally contracted to coach Leone Stars for just one game and that was the last 2012 qualifier in Niger in Niamey in March.

Despite losing that game 3-1, his contract was then extended by the sport ministry to lead the team for the remainder of the 2012 qualifiers.

Cole had lead Leone Stars for the team's first two matches in the qualifiers against Egypt and South Africa respectively before he was relegated to assistant coach in favour of the Swede for the Niger match in Niamey.