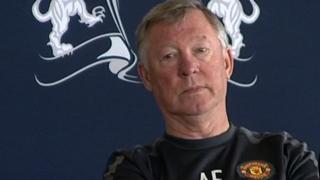 An indiscreet Sir Alex Ferguson is caught whispering that he wants a journalist who asked a question about Ryan Giggs banned from future Champions League final press conferences.

Giggs was identified in Parliament on Monday as the married footballer named on Twitter for having an injunction over an alleged affair with a reality TV star.