The 39-year-old has been appointed Bluebirds boss after two years in charge of Championship rivals Watford.

"It's a fantastic club, a very big club and a club I'm delighted to be manager of," Mackay told BBC Wales.

"The club are ambitious and I'm ambitious. We all want to compete."

Watford had reluctantly given Mackay permission to talk to Cardiff even though he had only signed a new three-year contract with the Hornets in March.

And Mackay explained it was Cardiff's ambitions that made him decided to leave Vicarage Road, where he had finished his playing career.

"I look at the infrastructure, the stadium and the training ground, the size of the fanbase and the ambition of the football club to succeed and go forward," said the former Norwich defender.

"Myself and my staff are ambitious people and I want to make sure I push for the right side of the division and push on as far on as possible.

"I firmly realise that there's an expectation level here with our fans and our football club.

"If you don't want that you shouldn't be in football."

Dave Jones' six-year reign as Cardiff boss ended in May following the Bluebirds failure to secure promotion to the Premier League.

Since then players such as Michael Chopra and Chris Burke have left and a number of on-loan players - including Craig Bellamy - have returned to their parent clubs. 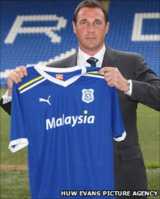 It would be disrespectful of me, to both him [Craig Bellamy] and Manchester City, to talk about him and his situation

And although Mackay admits there is rebuilding work ahead of him he says the club can be among the Championship's front-runners next season.

"We're all in a race from the start of the season and everyone who's in that race should want to win it," added Mackay.

"We're realistic in terms of the players that have left the club either by going out of contract or going back on loan.

"I think everyone's realistic in terms of big players need to be bought in to the football club to kick on from here.

While Mackay will have to add to the squad over the summer, he said current players would be given a chance to prove their worth.

"There are spaces there to strengthen," said the former Scotland player.

"It's up to the players here to make sure they put their best foot forward and push for a starting place.

"But it also allows some flexibility to bring players in.

"The fact that we have a small squad right now, with the guys leaving... the club and directors realise there need to be finances for infrastructure."

During his Norwich City days Mackay was a team-mate of Bellamy, who spent last season on loan at Cardiff City Stadium.

However Mackay would not be drawn on whether the Manchester City striker would return to south Wales for the new season.

"We know each other very well," said Mackay of the former Wales captain.

"We got on very well and we've bumped into each other through our careers.

"What I won't speak about right now is Craig Bellamy's contractual situation because he's a player signed to another football club.

"It would be disrespectful of me, to both him and Manchester City, to talk about him and his situation."

"[It's] a club I have a great fondness for," said Mackay, who spent a season at Upton Park.

"It will be a good test for us going up there first day of the season."