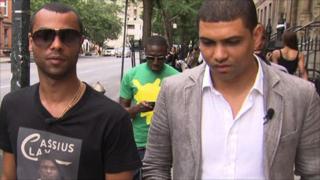 Judge me on football - Cole

England and Chelsea defender Ashley Cole tells BBC Sport's Leon Mann that he has "made mistakes" in his life but urges people to judge him on his football rather than media reports about his personal life.

Cole was questioned earlier this year after shooting a work placement student with an air rifle. He also went through a public divorce with pop star wife Cheryl last year.

"I just wish people would judge me more on football and speak about football more than a life that people don't really know," said the left-back.