Cardiff City manager Malky Mackay has refused to discuss the possibility of Craig Bellamy returning to the club.

The Manchester City striker spent last season on loan at Cardiff and doubts remain about his future at Eastlands.

Bellamy scored 11 Championship goals during his loan spell with the Bluebirds last season.

"I'm not going to talk about guys from other football clubs," Mackay told BBC Wales.

"Once they're in the building I talk about them."

Celtic had been among the clubs linked with the Wales striker, who spent a loan spell at Parkhead in 2005.

But Hoops boss Neil Lennon has said the chances of Bellamy returning to Celtic are "remote".

Inevitably that has renewed speculation the 31-year-old former Liverpool and West Ham player could return to his native south Wales.

However Mackay, a former team-mate of Bellamy's at Norwich, refused to comment on the speculation.

"It was fantastic for Craig he came back to the football club last season and great for everyone here," said Mackay.

"At the time no one could believe it in football when Cardiff City pulled off the coup.

"Right now Craig's a Man City player with time left on his contract so it would be disrespectful of me to talk about players from other football clubs.

"You won't find me talking about speculation about people who are signed to other clubs. 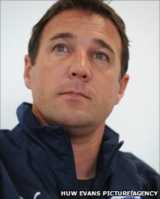 Robert's someone who's got an affinity with the club

"I wouldn't like other managers talking about my players in terms of what they're going to do with them.

"Once people are signed and they're at a football club, great, but up to that point we'll try and be as respectful as possible."

While Mackay was coy about the prospect of Bellamy returning to south Wales he was delighted to have re-signed another Wales striker.

Seven years after leaving the club, Rob Earnshaw has rejoined the Bluebirds on a free transfer from Nottingham Forest.

"It's great that we've managed to get him in," said Mackay. "It's great for Cardiff City Football Club and good for Robert I think.

"Robert's someone who's got an affinity with the club.

"He's a great addition. He's a man and a leader and someone who will be a voice in the dressing room as well."

And Mackay admits the 22-year-old is one of the players he's targeted as he continues rebuilding Cardiff's squad in preparation for the new season.

"He's someone we've looked at along with an awful lot of others," said the former Scotland defender.

"There will be compensation for him leaving because he's under 24. He's someone we've looked at among others.

"Again it's looking for the right type and we'll continue to do that as [the] close season goes on."

"He's someone we've looked at closely and we'll continue to talk to Dundee United about that one," he added.