"The expectation levels from fans will be if you get rid of a manager, you bring in a manager that has got to do better," said Jones.

"Fans will expect them to be up there as they have been there for six years."

Jones guided Cardiff to the 2008 FA Cup final before losing to Portsmouth and he returned to Wembley in 2010 when the Bluebirds lost the Championship play-off final to Blackpool. 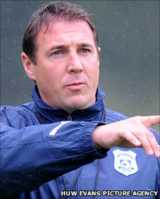 Mackay has been forced to rebuild his Cardiff squad since replacing Jones in June as 12 players left the Welsh club following their play-off semi-final defeat to Reading in May.

Top-scorer Jay Bothroyd and fellow striker Michael Chopra - who scored 31 goals between them last season - have departed while 11-goal Craig Bellamy has returned to Manchester City after his loan spell.

Mackay has added nine players - including strikers Rob Earnshaw and Kenny Miller - to revamp the depleted Cardiff squad but as Jones points-out: "They have lost a lot of goals.

"They have brought in Earnie and Kenny.

"I brought Kenny down here from Rangers when he was 20 to Wolves, but he has been out of the English game a long time.

"I brought Lee Naylor down and you could see that Lee had been away from the English game for a long time.

"Playing for Rangers and Celtic, a lot of the games are very easy so you get into that easy mode and all of a sudden you come down to the English game where you have to earn your living again....and it took a bit of time."

Mackay begins his Cardiff reign at Upton Park on Sunday where the Bluebirds face a strong West Ham United side who are among the favourites for immediate promotion back to the Premier League.

But in his first interview since leaving Cardiff, Jones told BBC Sport: "They [Cardiff] need to get off to a good start.

"There is a little bit of talk of consolidation, but they have done that for the last six years. The pressure is there, regardless of what anybody says.

"Regardless of what they say and whether they are going to give him time, it is a club where success is expected and you've got to deliver.

"And unfortunately the one prize they wanted, I just missed out on."