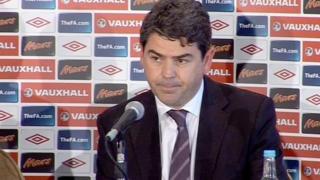 Adrian Bevington, the Football Association's managing director of Club England, reads out a statement on behalf of the squad as Wednesday's international friendly against Holland is postponed due to the London riots.

Manager Fabio Capello and his players were all present at a media conference, where Bevington and FA chairman David Bernstein detailed the reasons for the cancellation.

The players said they support the decision to call the fixture off and called for "calm" and an "end to the disorder that is ongoing".