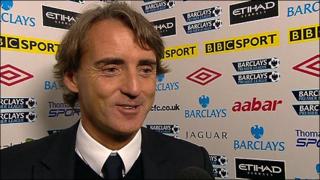 Manchester City boss Roberto Mancini sends a shiver down the spine of Premier League rivals by warning that Sergio Aguero is not yet fully fit, despite the Argentine's second-half debut which saw him score twice and make one goal in his team's 4-0 win over Swansea.

Mancini likened the £38m summer signing from Atletico Madrid to Brazilian star Romario, saying the 23-year old was like a "photocopy" of the Brazilian 1994 World Cup winning striker.

Mancini also paid tribute to Premier League newcomers Swansea, saying his team had to fight hard to open up the match and that the game had become easier when Aguero was introduced in the 59th minute.