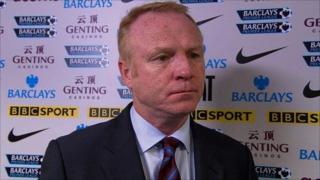 Aston Villa manager Alex McLeish describes his team's 3-1 victory over Blackburn as "terrific" but says the team needs to continue to win if he is to placate some doubting Villa fans.

The Scot also says fans saw the talent midfielder Fabian Delph has at his disposal after the 21-year-old produced a man-of-the-match display.