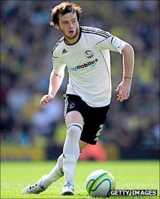 He's your prime example of what you can achieve when you work very, very hard

Brayford was the player of the season in 2010/11, starting all 46 league matches and both domestic cup ties.

First-team coach Johnny Metgod told BBC Radio Derby: "We wanted to reward the fact he's put everything in for the club. It's absolutely, fully deserved."

The 23-year-old moved to Pride Park on a three-year deal in May 2010, having previously played under Rams manager Nigel Clough at Burton Albion.

Brayford, who can operate as a centre-half, has played as a right-back this season, helping Clough's side win all four of their league games and move to second spot in the Championship table.

Metgod added: "If you see the way he came in here to the club, the way he's progressed, I think he's your prime example of what you can achieve when you work very, very hard every game that you play in and trying to give it everything you've got.

"There isn't any more he could have done for the team.