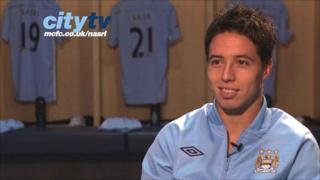 New Manchester City signing Samir Nasri says fans at former club Arsenal are not as "passionate" as those at City.

The France international signed a four-year contract at Eastlands for a reported transfer fee of £25m.

Nasri says it is a "big relief" the move has been completed, but likens Arsene Wenger to a "second dad", adding he will never forget the support the Arsenal manager has given him.