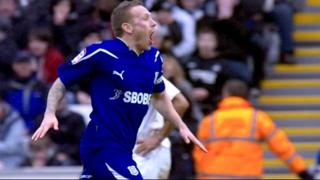 Craig Bellamy scores with a brilliant curling effort to win the match for Cardiff against rivals Swansea in the Championship last season.

The 32-year-old striker spent last season on loan at the Cardiff City stadium from Manchester City and has been linked with a free transfer back to one of his previous clubs, Liverpool.

Bellamy scored seven goals in 27 league appearances during his previous spell at Liverpool, before leaving to join West Ham after just a season at Anfield.