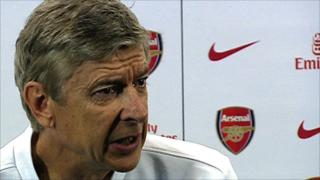 Wenger was responding to a message Trotters chairman Phil Gartside re-posted on Twitter from a Bolton fan, who was angered by the bid, plus manager Owen Coyle's criticism of the offer earlier on Friday.

The Arsenal boss admits the club have enquired about Cahill, but does not say whether or not he will make a revised bid.