Blackburn picked up their first point of the Premier League season by hanging on to draw with Fulham.

Ruben Rochina brought a tame opening to life when he smashed into the top corner to put Blackburn ahead on 32 minutes after Junior Hoilett's cutback.

But the visitors could not retain the lead as Bobby Zamora equalised soon after when he curled in from the angle.

In a better second period Danny Murphy and Clint Dempsey had shots saved as Fulham searched for the winner.

Gael Givet also denied Zamora with a timely interception and towards the end the visitors had to defend stoutly to keep the home side out.

They had a chance to pinch it in stoppage time, but as Hoilett attempted to nod a through ball past Fulham keeper Mark Schwarzer, the pair clashed heads and the winger was stretchered off in a neck brace.

Fears of a serious injury were allayed by Blackburn boss Steve Kean, who said Hoilett was concussed and need three or four stitches but was back on his feet after the game.

With West Brom earlier beating Norwich, the game matched the Premier League's two bottom sides and at times it showed, with plenty of endeavour but little quality to make further breakthroughs.

But by drawing, Kean's side avoided the embarrassment of being the first Blackburn side to lose its first four league games since helping found the Football League in 1888. 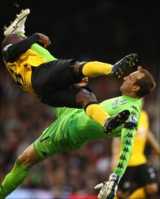 He's going to have three or four stiches on the side of his head. He is concussed but back on his feet now

And although the point will not dispel the doubters, who have rounded on Kean this week, it represents a step forward and proved that their defence is in good shape as they were under pressure for much of the second half.

They were far more positive in the first period with Hoilett a danger to the Fulham defence early on, first setting up Rochina and then David Goodwillie.

While at the other end, Scott Dann almost punctuated his Blackburn debut with an error when his attempted back pass was intercepted by Zamora.

But though the Fulham striker was knocked to the floor by Michel Salgado, referee Howard Webb waved penalty appeals away.

Despite their lack of goal threat, Fulham enjoyed early possession, but just as they were getting a firmer grip on the game Blackburn took the lead with a great strike.

There did not appear to be too much threat as Hoilett collected the ball wide left, but when he passed to Rochina on the edge of the area, the Spanish striker fired left-footed into the top corner.

Any hopes of Kean's team using that as a platform were wiped out six minutes later when Fulham equalised with what looked like a preventable goal.

Murphy guided the ball into Zamora on the right side of the penalty area, and once he cut inside to evade Givet's poor challenge, he steered the ball home.

New Fulham signing Bryan Ruiz failed to make an impact in the first half and was replaced at the break, and his team showed a greater willingness to attack in the second period.

Givet atoned for his first-half error to deny Zamora a good chance at the back post following John Arne Riise's teasing cross.

Then Fulham's chief orchestrator Murphy stepped over Dempsey's through ball but Paul Robinson palmed his effort away.

Dempsey was also denied as Martin Jol's side applied more pressure, but Blackburn were up to the task and Goodwillie went close late on after a rare counter attack before Hoilett clashed heads with Schwarzer.

However, with Fulham having lost only once at Craven Cottage in 2011, Kean will no doubt accentuate the positives in denying their opponents and getting Blackburn's Premier League season up and running.