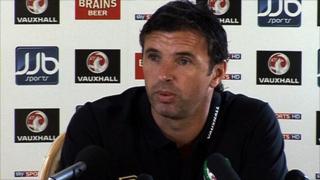 Wales manager Gary Speed says his team are full of confidence heading to Wembley to face England, after goals from Steve Morrison and Aaron Ramsey helped them to a 2-1 win over Montenegro.

Former Sheffield United boss Speed says he wants his side to get off to a good start - after Wales went behind early on in the reverse fixture in March to a Frank Lampard penalty.

Speed believes his side are still developing and that England are "the best side in the group", but insists it won't deter them from trying to get a result in their Euro 2012 qualifier.