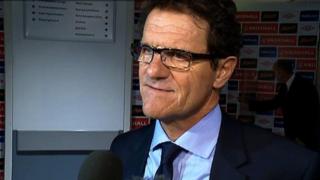 England manager Fabio Capello admits his side's performance in their 1-0 European Championship qualifying win over Wales was below par, but says the result was the most important thing.

Capello says he suffered in the final 15 minutes as Wales came close to equalising and believes his team were feeling the pressure of getting a result against Gary Speed's team.

The result leaves England needing a point from their final Group G match against Montenegro to qualify for next year's championships in Poland and Ukraine.

Watch: Masters semi-finals - Bingham edges back in front against Yan

Scottish Premiership: build-up & team news from around the grounds