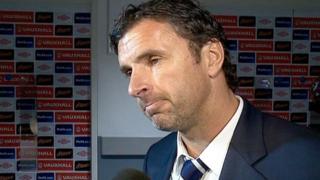 Wales manager Gary Speed admits his side are still developing as they lose 1-0 away at England in their European Championship qualifier, but says he was "really proud" of the way his team played at Wembley.

Speed says his team controlled the match in the second half and despite going a goal down, believed they could get a result against Fabio Capello's side.