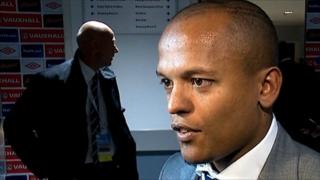 Striker Robert Earnshaw vows to pick himself up after missing a great chance to equalise for Wales during their 1-0 defeat by England at Wembley.

The Cardiff City striker blasted over the bar with the goal gaping, but insists it is a sign of Wales's progress under coach Gary Speed that they were able to create chances against England.