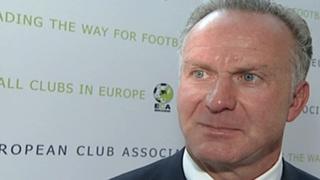 Fifa has proposed 17 games over a two-year period, but this provoked fury from Europe's top clubs when it emerged last year, and Rummenigge says the ECA and Fifa need to reach a "fair compromise" over the right number of fixtures.

The former Bayern, Inter and Germany player describes some of the international friendly dates, such as those in June and August, as "painful" for clubs and managers.