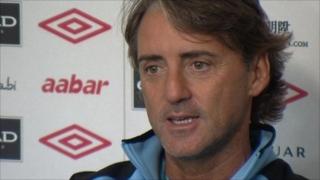 Mancini happy to wait for Hargreaves

Manchester City manager Roberto Mancini says new signing Owen Hargreaves will be ready to play for the club in two to three weeks.

The Italian believes the midfielder, who is short of match fitness after being restricted through injury to four appearances in the last three seasons, has a big role to play with the club this season.