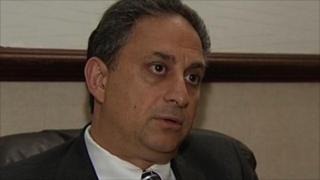 Cyrus Mehri, the US civil rights lawyer and man behind the pioneering Rooney Rule, tells BBC Sport's Leon Mann how the initiative has revolutionised the National Football League (NFL) and explains why he Is confident the English footballing authorities will adopt it.

The Rooney Rule (named after Pittsburgh Steelers owner Dan Rooney) requires all teams to include at least one black or ethnic minority candidate in interviews for senior management posts.