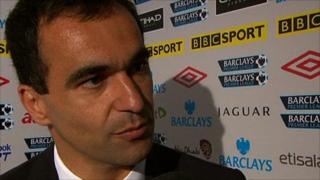 Manager Roberto Martinez admits Wigan were taught a "harsh lesson" after his side were defeated 3-0 by Manchester City.

Martinez says Wigan gave City "too much respect", but concedes that the Premier League leaders are a "phenomenal" side, who are on "another level" to their rivals.

The Wigan boss adds that his side need to learn from their mistakes quickly and focus on improving in future performances.