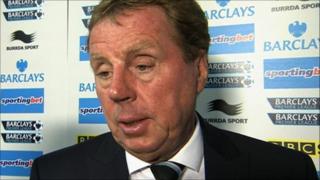 Tottenham manager Harry Redknapp says his side look "more solid" with Scott Parker in midfield, after the England international makes his debut and creates a goal in their 2-0 win over Wolves at Molineux.

Redknapp sings the praises of "top class" Parker, who combines with fellow debutant Emmanuel Adebayor to set up the opening goal for the Togolese striker, before Jermain Defoe's second seals Tottenham's first league win of the season.