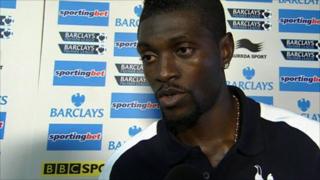 Emannuel Adebayor is delighted after scoring a goal on his debut for Tottenham Hotspur in a 2-0 win over Wolves at Molineux.

Adebayor says he is pleased to have the chance to play alongside "fantastic players" and adapt himself into the side, after fellow-debutant Scott Parker sets up his second-half strike.

The Togolese striker spent last season on loan from Manchester City at Real Madrid and says he feels "blessed" to be able to continue playing and enjoying football at Spurs.

England reply to Sri Lanka's 381 all out