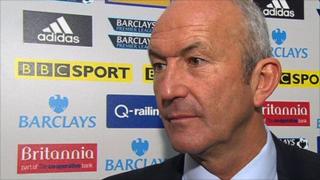 Stoke manager Tony Pulis says the spirit his side showed in holding on to a 1-0 home victory over Liverpool is something they have "had for years", but insists they will have to improve in possession if they are to win more matches.

Pulis also says he agrees with the referee's judgment on the penalty his side were awarded for a foul on Jon Walters, as well as on those denied for the visitors from two apparent handballs.