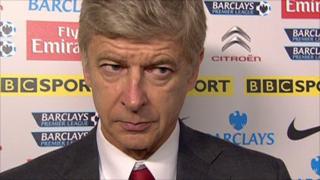 Arsenal manager Arsene Wenger says the priority for his side was "just to win the game" at home against Swansea and that nerves were to blame for their stuttering performance, despite the 1-0 victory.

Wenger puts the anxiety down to the lack of confidence in the side after their 8-2 defeat by Manchester United in their last match, and comments that failing to win the game would have been a "massive blow".

Scottish Premiership: Livingston 2-2 Celtic - Lennon's side 20 adrift after another draw