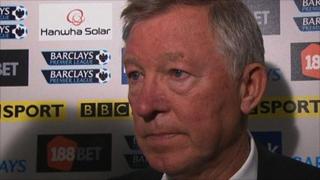 Sir Alex Ferguson is full of praise for Wayne Rooney and Javier Hernandez after they help Manchester United cruise to a 5-0 victory over Bolton.

Ferguson describes Hernandez' first goal as "fantastic" and says he is a "menace" to any defence, while Rooney is in "great form" after introducing more "authority" into his game.