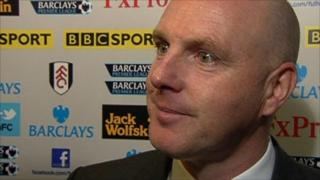 Kean not worried by speculation

Blackburn boss Steve Kean insists he is not worried about speculation surrounding his future at the club, saying he has the "confidence" of the club owners.

A fans' letter was sent to the Blackburn owners, Venky's, ahead of Sunday's 1-1 draw with Fulham, asking them to consider Kean's position at the club.

However, Kean says the owners are happy with how the team is progressing and he asks the fans to "back the players".