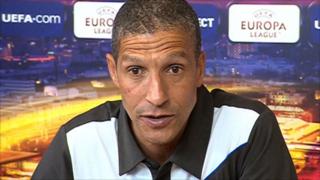 Birmingham City manager Chris Hughton says he will not let off-field distractions prevent him from preparing his team for their opening match in the Europa League against Braga.

Blues owner Carson Yeung is currently fighting charges of money laundering in his native Hong Kong and was due to return to Birmingham for the game, although this will now not be the case.

Braga were runners-up in the competition last season, losing 1-0 to FC Porto after knocking out Liverpool on their way to the final, and Hughton admits they are a "top quality team" as well as favourites to win the game at St Andrews.