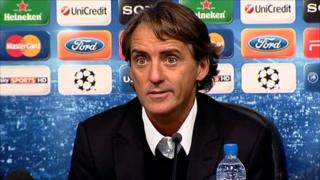 Manchester City manager Roberto Mancini admits nerves got to his players as the club's Champions League debut ended in a 1-1 at home to Napoli.

The City boss sees the draw as a fair result after his team fell behind to Uruguayan Edinson Cavani's breakaway goal before Aleksandar Kolarov's 75th minute free-kick saved a point.

Manchester City travel away to Bayern Munich, who won 2-0 away tonight in Villarreal, for their next Champions League fixture.